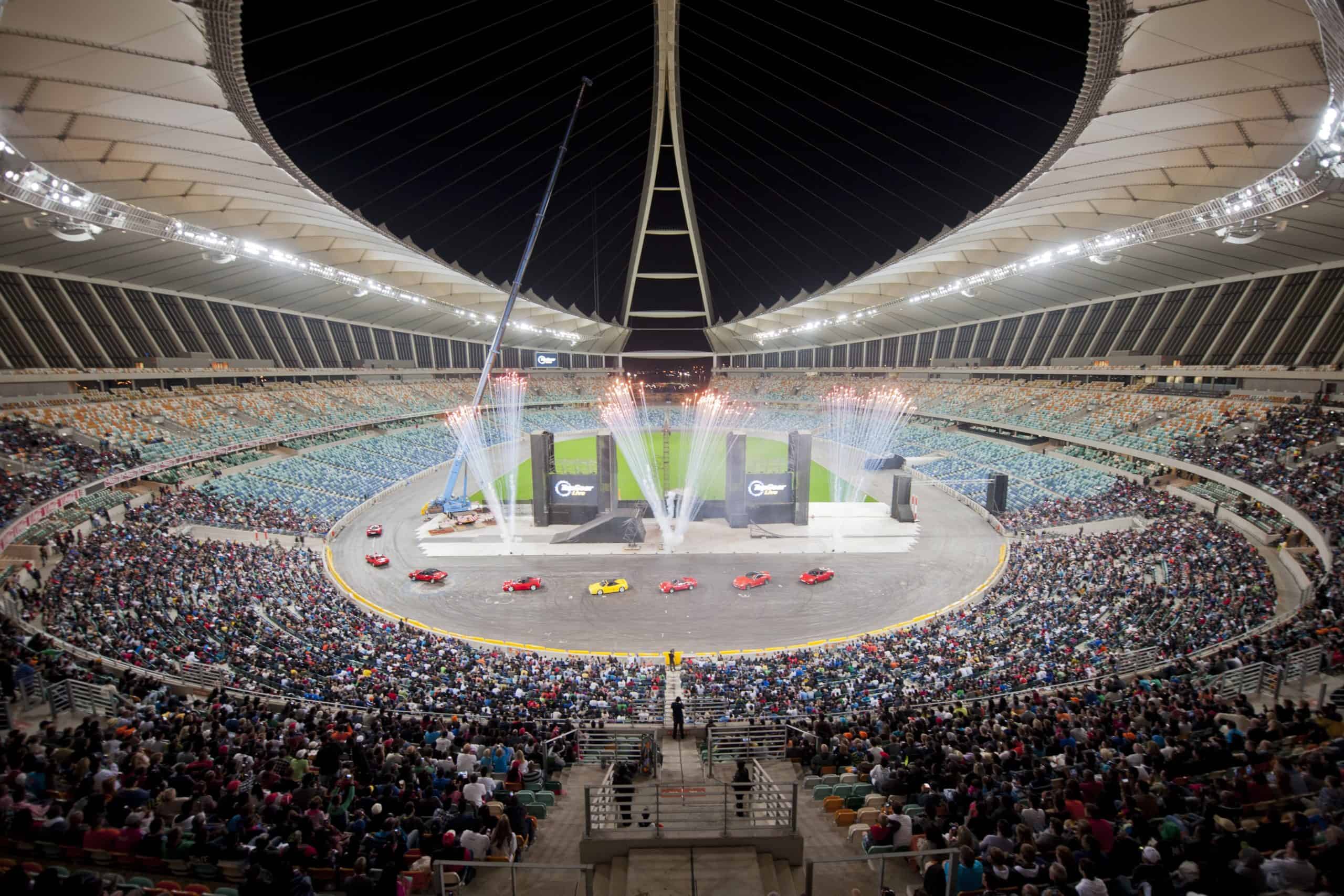 The supercars are fuelled, the presenters are revved up and the stage is set for the third installment of the action packed Top Gear Festival Durban.

Hosted by all three of the UK show’s inimitable presenters – Jeremy Clarkson, Richard Hammond and James May plus tame racing driver ‘The Stig’ – the stadium show, which will be one of the highlights of the two day festival, promises to be a breathtaking cocktail of stunts, supercars, special guests and challenges.

In one of their most ambitious shows yet, the producers have set the boys a challenge of creating their own interpretation of electric racing cars, they will be going head to head in a drifting challenge which will see one of them crowned as the champion and the Top Gear Live Stunt Driving Team will take on one of their most intricate stunts yet.

The dynamic trio will pay special tribute to successive generations of revolutionary performance cars such as the Ferrari Testarossa’s evolution into the Ferrari 599 GTO and asking the question; Which is better – old or new?  They will also be celebrating their most chaotic and dangerous moments over the past 12 years by showing a brand new film – a world premiere of this montage and a must see for all Top Gear fans.

For the first time ever this year’s show will feature customised music in the form of a rap written and performed by none other than local rapper Jack Parow. The Top Gear boys are very much looking forward to meeting the controversial Afrikaans rapper but Richard has expressed concerns of what the rapper may expect from him; “We’ve heard that a certain rapper called Jack Parow will be joining us in the Moses Mabhida Stadium this year although know one’s told us quite what he’ll be up to, I for one am intrigued to know what he’s going to be doing in our show? I just hope he’s not expecting us to do any rapping!”
Festivalgoers can expect a day packed full of entertainment as this year’s Top Gear Festival Durban in ‘the warmest place to be’ offers a true celebration of all things motoring. Visitors are encouraged to book early to avoid missing out on the most exciting event on this year’s entertainment and motoring calendar.
For more information and updates on fun festival activities, stay tuned to the Top Gear Festival website, www.topgearfestivaldurban.co.za

The live events offer an exciting variation on more traditional motoring events.  Top Gear Festivals* include elements such as Motoring Theatre which incorporates the drama of film and theatre with the thrills and spills of stunts and special effects; Track Action including Stig power laps, head-to-head racing, supercars, drag racing & celebrity race challenges; Exhibition Areas – packed with supercars, classic motors and motoring memorabilia as well as other features.
Since 2008 Top Gear Live events have entertained over 1.8 million fans in 21 cities around the World and we are proud to be bringing this event to Durban, South Africa for the third time.
*Festival content varies by Country

About BBC Worldwide Ltd.
BBC Worldwide Limited is the main commercial arm and a wholly owned subsidiary of the British Broadcasting Corporation (BBC). BBC Worldwide exists to support the BBC public service mission and to maximise profits on its behalf. It does this through investing in, commercialising and showcasing content from the BBC around the world, in a way that is consistent with BBC standards and values. The business also builds the reach and reputation of the BBC brand overseas and champions British creativity. In 2012/13, BBC Worldwide generated headline profits of £156m and headline sales of £1,116m and returned £156m to the BBC. For more detailed performance information please see our Annual Review website: http://www.bbcworldwide.com/annualreview
bbcworldwide.com
twitter.com/bbcwpress