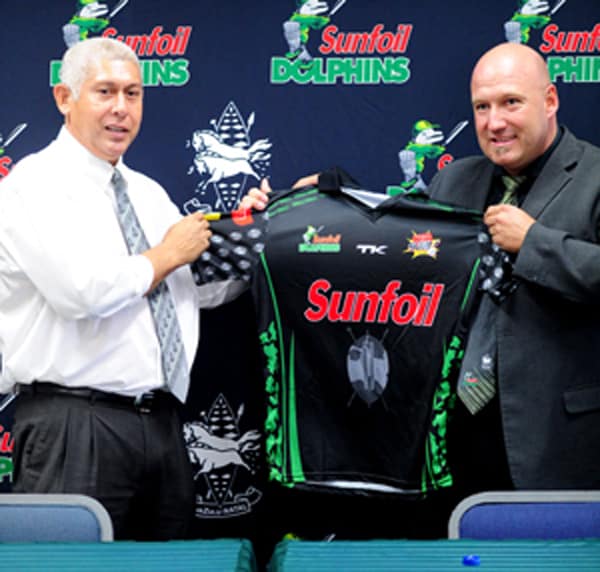 The Sunfoil Dolphins and the KwaZulu Natal Cricket Unionare buzzing with excitement and expectation, as they prepare to welcome Pete De Wetas their new CEO.

With more than 16 years of expertise in the fields of sports marketing and sponsorship, De Wet has a long association with cricket in South Africa. At various times he has been involved at a sponsorship level in the management of both domestic and international cricket events such as the Coca-Cola Khaya Majola Cricket Week, the2003 ICC Cricket World Cup, the 2012ICC Champions League T20, the Ram Slam T20 Challenge and most recently he returned from the 2015 ICC Cricket World Cup, where he managed two stadium venues in New Zealand.

He has a passion for sport and cricket, and as a businessman,De Wet comes to KZN Cricket with wide experience,having held prominent positions in reputable organisations in South Africa and Europe. He is vacating his current position as Joint Managing Director of The ITM Group.

Faeez Jaffar, KZNCU President and Chairman of the Sunfoil Dolphins said,“I am pleased that a person of this calibre has been appointed to this position. Pete comes to KZN Cricket with extensive expertise in the commercial side of cricket, marketing, brand management and general business acumen. His experience will contribute towards the objective of positioning the Dolphins brand as a leading global brand and we especially look forward to new innovations in the commercial and management aspects of the business.Pete is also tasked togetherwith our coaching and team management staff, with building on the success of the Sunfoil Dolphins.”

Jaffar also thanked the Acting CEO and current Chief Financial Officer, Rajesh Behari, for having filled the position in the interim.

“Rajesh took up the challenge when appointed to act as CEO and he has demonstrated that KZN Cricket is in good hands with Pete joining the team.”

De Wet is a graduate of the University of Johannesburg and an old boy of King Edward VII School and is a proud husband and father of two daughters.

Commenting on his appointment, De Wet said, ‘’I am honoured and humbled to be given the opportunity to lead this fantastic Franchise and Cricket Union. KwaZulu Natal has such a rich cricketing history, and together with the great team already in place, I am ready to accept the challenge of taking this business forward. As custodians of the game of cricket in the Province, there is a great expectation on usto look after the welfare of cricket at both amateur and professional level – and this is a task that I will take on with great enthusiasm and pride.”