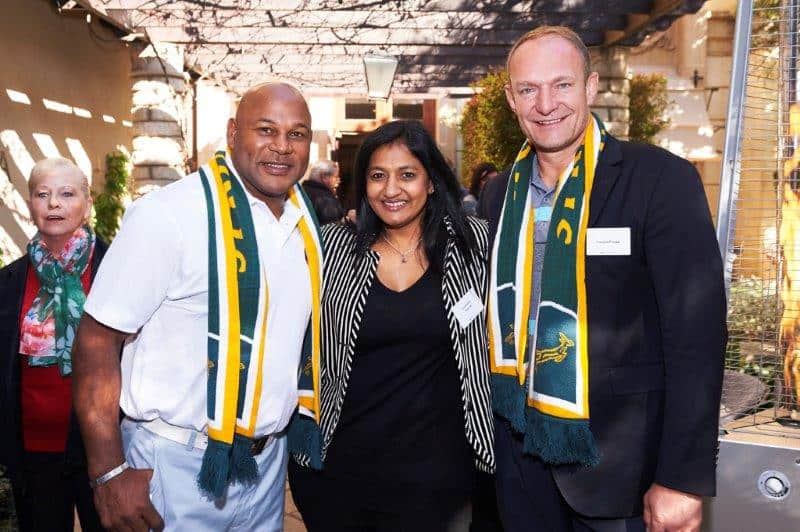 The Rugby World Cup is around the corner and “Destiny is knocking again. When we stand together we are unstoppable…” That’s according to the #HomeGroundAdvantage SA Rugby social media campaign for the RWC. And that’s Tsogo Sun’s commitment to the Springboks as they celebrate 20 years since South Africa’s first RWC win and prepare to battle it out for the top trophy in world rugby for the third time.

“We have been partners with SA Rugby since our RWC win in 1995 – and we’re proud to Get Behind the Boks through our “Fly The Flag” initiative, which will run alongside the SA Rugby campaign as a powerful demonstration of support for the Springboks,” says Tsogo Sun’s Director of Marketing Noëleen Bruton.

For a two month period, the public will be invited to sign a good luck message to the Springboks on a ribbon, using one of the ribbon devices at Tsogo Sun properties around the country. These ribbons will then be sewn together to form a 3m x 8m flag that will be displayed on the Montecasino Piazza. A smaller replica of this flag will also be handed over at the Springbok send-off ceremony at Montecasino on 11 September.

The ‘Fly The Flag” campaign runs from 24 June to 25 August when all the signed ribbons will be collected and assembled to create the flag. For a week before the send-off ceremony, the flag will be on display at Montecasino to build further support for the Springboks.

“We’ve created a campaign that would give Springbok fans the chance to do something tangible in support of their team; to be involved in a unifying project that will no doubt be inspiring and encouraging for the Boks as they face this mighty challenge,” says Bruton.

Another exciting competition that also forms part of the Tsogo Sun RWC initiatives is campaign where a fan and five friends can win a weekend at the Palazzo Penthouse to watch the final game at Montecasino Boktown, as well as a host of great prizes from major sponsors, simply by posting the best Springbok supporters selfie.

“Our support of sport in South Africa has seen us partner with many national teams, most prominently with the Springboks, and we are so delighted to be assisting SARU in their campaign by implementing our initiatives in support of the Boks,” continues Bruton.

Tsogo Sun’s 20-year relationship with SA Rugby was strengthened at the time of the 1995 Rugby World Cup when Tsogo Sun was appointed the official and exclusive hotel group for the event. Subsequent to the RWC, a partnership agreement was entered into with SA Rugby, and Tsogo Sun has been their official accommodation partner ever since. This partnership with SA Rugby also gives Tsogo Sun exclusive rights to host Boktown – the Springbok Supporters Village – at its Montecasino, Silverstar and Suncoast properties. This year three more Tsogo Sun properties have been confirmed as additional official Boktown venues – Gold Reef City, Emnotweni in Nelspruit, and the Ridge in Emalahleni – for the Rugby World Cup.

“We believe that an overwhelming show of support from all South Africans for our Springbok team can give them the home ground advantage – even in England – and help them to bring home the ultimate rugby trophy. We’re proud to be able to play our part in this campaign,” says Bruton.

Tsogo Sun’s support of sport over the years has grown to include the majority of South African sporting codes, including both national and provincial associations. The group is the proud accommodation partner to Bafana Bafana, a relationship that began in 1996 when Tsogo Sun was the exclusive accommodation supplier for the Africa Cup of Nations tournament. The group also has an ongoing partnership with the KwaZulu-Natal Cricket Union (KZNCU) through the Suncoast Dolphins Cricket Academy and an exciting development for Tsogo Sun is its support of the national netball squad, the Proteas. The group has also built up a good relationship with Varsity Cup Rugby and Varsity Sport, which started with rugby but has now branched out to include soccer, hockey and athletics. Tsogo Sun is the official accommodation partner to the PSL as well as to several of the teams, and Kaizer Chiefs use Southern Sun Montecasino as the base camp hotel for all their home games.

This ongoing commitment to sport by Tsogo Sun has brought it to headline sponsorships of both the Tsogo Sun Amashova Durban Classic and the Tsogo Sun Sprint last year, and the Tsogo Sun Duke of Edinburgh Cup amateur golf tournament which is a prestigious event that gives Tsogo Sun the opportunity to link sport and its CSI activities. Support of the youth through sport is a major focus for Tsogo Sun.

Tsogo Sun has a portfolio of over 90 hotels and 14 casino and entertainment destinations throughout South Africa, Africa, the Seychelles and Abu Dhabi. For further information, go to tsogosun.com, follow on Twitter @TsogoSun or Like on Facebook /TsogoSun.

About Tsogo Sun
Tsogo Sun is the leading hotels, gaming and entertainment company in South Africa, providing a variety of hospitality and exciting entertainment and leisure experiences. Combining an established heritage with a professional and energised approach, the group proudly encompasses 14 casinos and over 90 hotels in South Africa, Africa, and the Seychelles.

The exciting urban and resort casino portfolio includes the most popular entertainment destinations, strategically located throughout South Africa. In the Gauteng province, Tsogo Sun owns the group’s flagship property, Montecasino in Fourways, which features, amongst other attractions, the award-winning Teatro; Gold Reef City Casino and Theme Park in Southern Johannesburg; and Silverstar Casino to the West in Krugersdorp. Additional properties are owned and operated in the Western Cape, Eastern Cape, Free State, Mpumalanga and KwaZulu-Natal, including the jewel on Durban’s Golden Mile, Suncoast Casino, Hotels and Entertainment.

Tsogo Sun’s philosophy of sustainability has seen the group structuring its support of the communities in which it operates into three main pillars of investment. This includes Corporate Social Investment, whereby the group promotes the development of learners through three academies which offer holistic, full-year programmes centred around sport, art and education; Enterprise Development which focuses on skills-based entrepreneurial development through its Tsogo Sun Book a Guesthouse and Supplier Development programme; and Environmental Management, committed to initiatives that reduce the impact the business has on the environment.

Tsogo Sun Gaming supports the National Responsible Gambling Programme. Winners know when to stop.  Only persons over the age of 18 are permitted to gamble. National Problem Gambling counselling toll-free helpline: 0800 006 008.